Company description: Apache is an oil and gas exploration company that operates mainly in the US.

Implied volatility and probability: IV for this trade is fairly low at 51% but still high enough to be able to enter this position. I haven’t really gotten a feel for this yet value yet I will try define an IV limit in the future, 50% seems to be about right. This trade at the current IV has a %83.24 probability of success.

Support and resistance: The main resistance level will be at the 48.5 mark which has been tested a number of times, the next one is at the 53.5 strike. This was touched back in November 2015 but was due to positive company report at the time. This caused 2 days of candles at the 53.5 level and then quickly fell back. 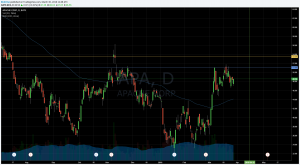 Exit strategy: Ideally the trade will stay below the 53.5 strike level or probably the 51 level at the first resistance point. If the price of the underlying stock rises above the 51 level and oil is moving strongly higher due to fundamental reasons or even just due to some shock even in the middle east or something I will need to exit this position. If the 53.5 level is breached due to a slow increase middle month I can probably easily close it.

News and thoughts: This is an oil trade ultimately, the stock looks like its poised to fall as it’s just undergone a large move up over the last few weeks and is likeley to want to rest for a little while. The oil price also seems to be poised to fall back too and the USDCAD is positioned to rise off of a double bottom. So I’m taking a bearish outlook on oil at least for the next few weeks. 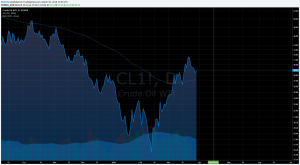 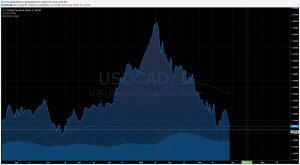 I’m fairly confident in the strength of the 51 level as long as there is no hard fundamental news. As long as there are no terrorist attacks over the next few weeks we should be good.

UPDATE 13/04/2016: Recent news came out last night that Saudi Arabia and Russia were coming to a deal to restrict oil production, this stirred the market and spiked the oil price. APA jump 6.5% in one night putting this trade in the danger zone. The last candle has busted it’s way upward past the 51 resistance level and up to my the 53.5 strike level. The trade is in danger of breaking out to the upside although I would expect strong resistance at this current level. However, to be on the safe side and to follow the trade plan for this trade “if oil is moving strongly higher due to fundamental reasons I will exit this position” I have put in an order to close the spread position tonight.

CLOSE 14/4/2016: This trade was closed last night at a -20% yield, this was due to the news on the previous day on oil. The next day however, news came out that there was more oil in the reserves that previously expected so the price fell back again into a safe territory. However, I setup an exit order during the day in order to follow the trade plan resulting in a small loss. These types of small losses are great because it demonstrates discipline and one day it will save me from a -100% loss and possibly worse.

UPDATE 22/04/2016: APA closed well below the strike, which is annoying but then in the following days it came back up and has consistently pushed up past the strike over the last 3 days intraday. A little annoying but overall, closing this was the right thing to do.

I'm a newbie trader, looking to get into the financial markets and try to make a life for my self in there. I've found that I'm fairly emotional when it comes down to putting money on the line like this so I thought I would write this journal. It calms me down knowing I have at least some kind of plan to work my way through these trade positions. I'm also a fairly keen python developer, I guess I can call myself a "developer" although I'm more of a script jockey. I can build scanners and interact with my brokerage account programatically. Not a quant by any stretch but I do have some skills, I would consider my knowledge of python and my passion for the markets my main edge.