Company description: NVDA is a graphics card producer for PC all over the world.

Implied volatility and probability: IV for this trade is at 34% pretty high over the last few days due to 2 analysts downgrading the stock saying that gaming is slowing down. This to me is an entry oppurtunity especially for a short term position. As a gamer I feel like it’s a fairly exciting time for games but that’s just my own meaningless opinion.

Support and resistance: The main support is at the 100 level which is where the stock is at now. I don’t believe the market will give much weight to those analysts reccomendations for long and so hopefully this level will hold. 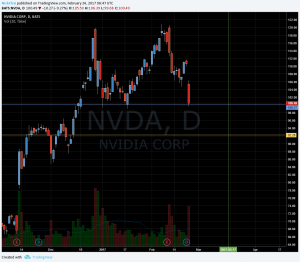 Exit strategy: Ideally the trade will stay above the 92 strike and expire worthless. If the stock price falls below the halfway point of the spread at 89.5 level it will have the chance to then break through another support level which could be tough to recover from and we’ll need to close it out at a loss.

News and thoughts: NVDA is currently the leader in graphics chips ahead of AMD which has pretty much been left in the dust now. With the absence of AMD over the last year NVDA has almost a monopoly on high end graphics chips and has now expanded into autonomouse cars which was seen as a positive move by the markets. The company has outperformed estimates on the past two earnings annoucements. Hoping to get filled tonight, will update this post with details once order is filled.

Update 28/02/17: We had some follow on dip the day after entry but the 100 support level held and the day turned positive the following day the stock continued to rise well above the 100 support level. We’ll see how she goes tonight, looking good so far. 13 trading days left.

Update 03/03/17: So GDC happened, NVDA and AMD both revieled new GPUs it was also announced that the Nintendo switch is using an NVDA GPU chip so sales of the switch might affect this stock too. The stock has however, fallen below the 100 level after the same analyst reinforced is opinion that the stock is curerntly overpriced due to inventory levels. Others believe there are higher inventory levels because of the new card thats about to be released in March. Conflicting views but the stock has still closed below my key support, the next level is at about 95/94 level still above my strike. I don’t think it will get to my close out level at 89.5 before expiry:

I'm a newbie trader, looking to get into the financial markets and try to make a life for my self in there. I've found that I'm fairly emotional when it comes down to putting money on the line like this so I thought I would write this journal. It calms me down knowing I have at least some kind of plan to work my way through these trade positions. I'm also a fairly keen python developer, I guess I can call myself a "developer" although I'm more of a script jockey. I can build scanners and interact with my brokerage account programatically. Not a quant by any stretch but I do have some skills, I would consider my knowledge of python and my passion for the markets my main edge.